This important mine is associated with the great coal 'adventure' launched by Mussolini's government, to provide Italy with energy independence, when in 1936 the country was faced by the econom­ic sanctions imposed by the League of Nations following the war in Ethiopia. It was at that point that the coal of Bacu Abis was re­named Carbonsulcis, the National coal of Fascist Italy, as a slogan of that time announced.
Serbariu was at the time the leading mine of that extraordinary or­ganisational and production effort which brought production to lev­els unthinkable only a few months previously - more than 1.2 million tonnes were extracted from the Sulcis coalfields in 1941 alone.
The project implemented by the Societa Mineraria Carbonifera Sarcia (set up in 1934 and controlled by the Azienda Carboni ltaliani ACal, chaired by Guido Segre) was one of the most extraordinary mining feats of 20th century Europe. In 1937, at the end of a far-reaching and organic prospecting campaign, the Serbariu seam was discovered. The mining concession was issued in 1939, starting off a large-scale development programme. Thus, just 11 months later, the mine was operational, with both underground and surface works in place, and a workforce of some 5,750, and soon achieved record outputs, with a monthly production in excess of 45,000 tonnes in 1940. Thus in the early 1940s Serbariu was the leading mine of the Car­bonifera Sarcia, partly because of the size of its deposit but also because of its closeness to the port of Sant'Antioco, with access by means of a purpose-built spur rail line.
The war and post-war period proved a bad time for this 'autarkic' industry and especially for this mine. Despite the high production levels, the Sulcis coal came increasingly under the pressure of for­eign competition, especially from Polish coal, which, for the same calorific content, was priced at about half the production costs of Serbariu. Plans to use the coal locally by building a large coal-fired power plant at the mine head fell through. Despite its handover to ENEL following nationalization, in the mid 1970s Serbariu had to be closed for good. 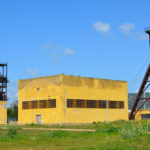