Mine of Planu Sartu

Planu Sartu, together with the underlying open cast site of Malfida­no, are more commonly known as the mining complex of Buggerru, although this is actually the name of the town which was built for the miners and their families.
The fame and success of these ore deposits was due to the Franco­Belgian engineer Giovanni Eyquem, who devised a method to extract zinc from calamine (a mix of zinc silicate and zinc carbonate) which abounded in the area. The area thus became a major source of zinc, which was in high demand on the European markets.
The mining concession was awarded in 1870 to the "Societa Civile delle Miniere di Malfidano", created by Eyquem himself with French capital. Buggerru thus became a sort of French enclave in Sardinia (it was known as "Little Paris'1, and most of the managers who led its industrial development were French: Bourdiol, Cabriolier and Geo­giades, to mention just a few.
To process the large amounts of ore extracted at the two sites, Planu Sartu and Malfidano, in 1877 a washery was built, and subsequently operated, by another French company the Societe Anonyme pour le Lavage des Minerais en Sardaigne, which had developed a special technology for processing calamine ore.
The consequent increase in the workforce, to a total of almost 2,000 at the various worksites, induced the Malfidano company to improve life in the village. Thus new houses for employees were built, as well as a church, a small hospital, a small hotel and a theatre. Electricity was introduced, which allowed the screening (possibly for the first time on the island) of Pathe films, based on the Lumiere brothers' invention.
World War I and, even more, the first post-war years proved very difficult for these mines, which in 1928 had to seek help from Mon­tevecchio, which was then pursuing an expansion strategy. However, five years later, as Montevecchio too had fallen on hard times, Pedru Sartu was taken over by the Pennaroja-Pertusola company which re-launched production, improving and modernising plant and infra­structure. This ltalo-French company operated the mine until 1969, when, due to economic difficulties, it was sold to the Ente Minerario Sardo. The mine was finally closed down in the 1980s. 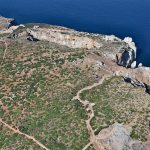