Masua certainly represents as one of the most interesting pages in Sardinian industrial mining history. The first concession was grant­ed in 1857 to the Societa Anonima delle Miniere di Montesanto, which sublicensed mining operations to the Calvo & Scarzella com­pany. This collaboration was to last for 27 years, after which the Montesanto company took over direct operation of the mine.
The next change of hands was in 1910, when the concession was acquired by the Societa Anonima delle Miniere di Lanusei which upgraded operations and boosted output. Some years later, the Lanusei company came under the control of the Belgian Societe des Mines et Fonderies de La Vieille Montagne which in 1922 merged it with its operations and managed it together with the mines of Acquaresi and Nebida.
The Belgian company's main achievement was the construction of Porto Flavia, designed by engineer Cesare Vecel/i (Flavia was his daughter). The logistical importance - especially from an economic point of view - of this loading terminal for the processed ore gave further momentum to production which in 1935 reached record figures. Unfortunately, in the same years the Italian Government adopted retaliatory measures in response to the economic sanc­tions decreed by the League of Nations, including confiscation of the Belgian company's assets and their transfer to SAPEZ (Societa Anonima del Piombo e dello ZincoJ a subsidiary of the State-held group AMMI. However the new owner undertook large-scale mod­ernization and upgrading of the underground mine works, reaching an annual output of almost 700,000 tonnes. The mine's decline started in the 1980s when it was taken over by the ENI group, and inexorably continued until its final closure in 1999. 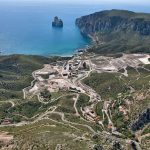