The galena lode of Malacalzetta was one of the most powerful magnets for those who between the 18th and 19th centuries  were struck down by 'silver fever'. Indeed there were many Sardinians who wandered about hoping to identify gleaming  stones  or rocks (as found in nature, galena has a light grey colour and a bright metallic sheen). Thus for several years, following  the notes  made by that scrupulous geologist, Cavalier Pietro Belly, shepherds and notaries, priests and country gentlemen  searched  the Oridda  area in hopes of discovering a fortune.

Malacalzetta was one of the lucky sites: in 1872 the Societa Anonima delle Miniere di Montesanto purchased from a prospector a government permit to study its geology in depth. The mining concession, issued in 1880 went to a different applicant,  the Societa  Anonima per le Miniere di  Lanusei,  which  entrusted  mining  operations  to the United Mines Company Ltd, which began to trace out the first galleries, starting from the Baueddu shaft, and created a series of calcining furnaces, a small washery and some buildings for use as offices, dormitories and residential quarters. Underground works came up against several difficulties due to the presence of water which hindered tracing of the galleries. The mine remained under the English company's management for about 15 years, but immediately after World War I it was handed over to the Pertusola company, which was already operating the nearby Arenas  mine. This /ta/a-French company built a small narrow-gauge rail track linking the two mines, and was thus able to use the washery to process Arenas ore also (the plant was also upgraded by introducing the flotation process, which was much more efficient and cost­ effective).

Pertusola management lasted until 1969, when the mine was taken over by the Piombo Zincifera Sarcia, a company controlled by the Sardinian Mining Agency, E.M .Sa. Final closure took place 10 years later. 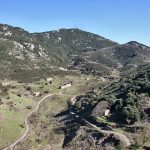