In the territory of Lula, on the slopes of Monte Alba, the argentifer­ ous lead seam of Guzzurra was mined in Roman times, as is shown by a series of excavations and the discovery of ancient tools. In the mid-1i h century, when Sardinia witnessed a  resurgence  of  'mining fever' several prospectors were attracted by the great surface deposits of galena mixed with silver. Their size warranted the start of industrial activity, and this came to the ear of Genoese banker Paolo Nicolay, at that time (since 1850) the president of the Monteponi company.

Thus, in 1862 the mining concession was awarded to Monteponi which, starting from the Argentaria site, began mining works, soon however encountering operating difficulties. Six years later the Monteponi company sold its rights to two businessmen from Marseilles (Pasquale L. Sigme and Enrico Giraud) who completed plant installation, extended the galleries and constructed a mechanical washery and housing for the  workers,  plus  storage  facilities  on the beach of La Coletta at Siniscola). This French influence is also reflected in the names given to the galena seams mined: Sainte Claire, Napoleon, Saint Anne, Pastret, etc.

Later on, the murder, which would remain unpunished, of one of the concession holders (Sigme) led to suspension of activity, which was resumed around 1910 by Gennamari-lngurtosu, a company of the Pertusola group which had taken over the concession. But both engineers and miners continued to be at risk of violence, to the point that a high wall had to be built to protect the compound from criminal raids.

After World War I, in view of the persisting lack of safety the mine was abandoned and closed. Many years later, in 1961-62, the Societa Ricerche Minerarie RI.MISA., a subsidiary of the Monteponi­ Montevecchio group made an unsuccessful attempt to reopen the mine. Since then the mine and its village have remained closed and abandoned. 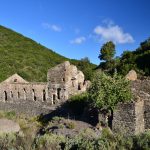