Mine of Corti Rosas

Located near the small town of Ballao in the Gerrei district, Corti Rosas was once an important antimony mine.

The presence of mineable deposits was first reported in 1796 by the Piedmontese engineer Belly, but industrial exploitation only started one century later (1897). The first concession holders were the Eng­ lishmen Pobonsy and Lewis who started extraction work and con­ structed the first buildings. Profit from operations were uneven, due to the strong fluctuations in antimony prices on the markets, and production was suspended several times.

In the mid 1930s, the mine was taken over by AMMI, the State non­ferrous mining and processing company. It was connected to the nearby mine of Vil/asalto - Su Suergiu - forming a single production unit. In those years, as a result of the autarky policy adopted by the Fascist government, antimony became a strategic product, and the national production centres were considerably upgrad ed. Thus it was that new plant and machinery was introduced to improve yield, including a modern ore processing plant. At the time, labour force peaked at several hundred, and a village for the miners and their families was built, together with management offices and liv­ ing quarters.

In the second post-war period, the repeal of protectionist measures

sealed the fate of the mine and in the mid 1960s production came to a halt. After a short-lived revival in the following decade the mine was closed down permanently by the State company. 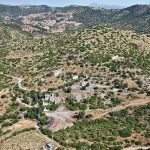 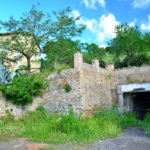