Mine of Capo Becco

The small island of San Pietro is closely linked to the birth and development of the Sardinian mining indust ry, above all because starting from the mid-19th century and for several decades the sail and steam boats carrying ores to the Provencal and Ligurian found­ ries began their voyage from this small island's port, Carloforte.

But here too, a mine was opened in 1873 to exploit the manganese deposits discovered by a French prospector, Pietro Chareyze, near Capo Becco.

Notwithstanding the strong market demand for manganese, a col­ouring agent, this venture was never particularly profitable, and had a troubled and not easily traceable history, changing hands several times. In 1877 it was sold to another Frenchman, Edmond Piot, who in turn, after going bankrupt, ceded it to yet another Frenchman based in Cagliari, Alberto Chapelle. At the end of the century, it was acquired by the Bellegrandi family, which operated it for about twenty years, and succeeded in increasing production. In 1921 the mine installations and concession, passed into the hands of the Compagnia Mineraria di Capo  Rosso  for about  a  decade, and were subsequently acquired by a German industrialist, Otto Kassel. In 1937 the public company AMMI took over the mine, and introduced a series of organisational improvements, including in­ stallation of an electric cableway to carry the ore from the mining site to the silos on the coast for loading. In the period following World War II the mine was once again operated by Kassel, assisted by manager Era/do Uccheddu with varying degrees of success, and was finally closed down permanently in 1977 . Today the mine is abandoned, but some buildings can still be seen, together with the remains of the cableway and the power generator. 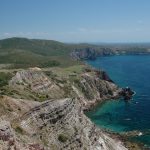