This important mining complex (the mines of Genn’e Carru, Pitzianti and Tinì) which was active for almost a century (1877-1980), is situated in the Iglesiente-Fluminese area in that territory which at one time formef part of the county of Oritida. The area's mining potential was known already in the 18th century, when prospecting was carried out by some local entrepreneurs, including Cavalier Luigi Rogier and Don Efisio Paderi.

But industrial lead and zinc mining operations were established in the following century by the English Company Henfrey - Etchats & C. Ltd., one of whose owners, Sir George Henfrey managed the project for about fifteen years then selling it in 1891 to Pertusola, at that time controlled by another English company, the United Mines Company Ltd. Initially, mining was mainly underground, with access through the Lheraud shaft; later open cast mining was undertaken, after a large deposit dose to the surface was found.

Under the management of Pertusola, a subsidiary ofthe Pennaroja Group, one of the powerful multi-national mining conglomerates controlled by the French financiers Rothschild, the mine reached very high outputs, thanks a/so to the construction of a processing plant handling 400 tonnes per day. In 1969 the mine was sold to the Ente Minerario Sardo, which kept it in production until 1980 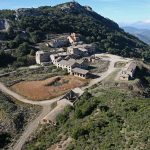